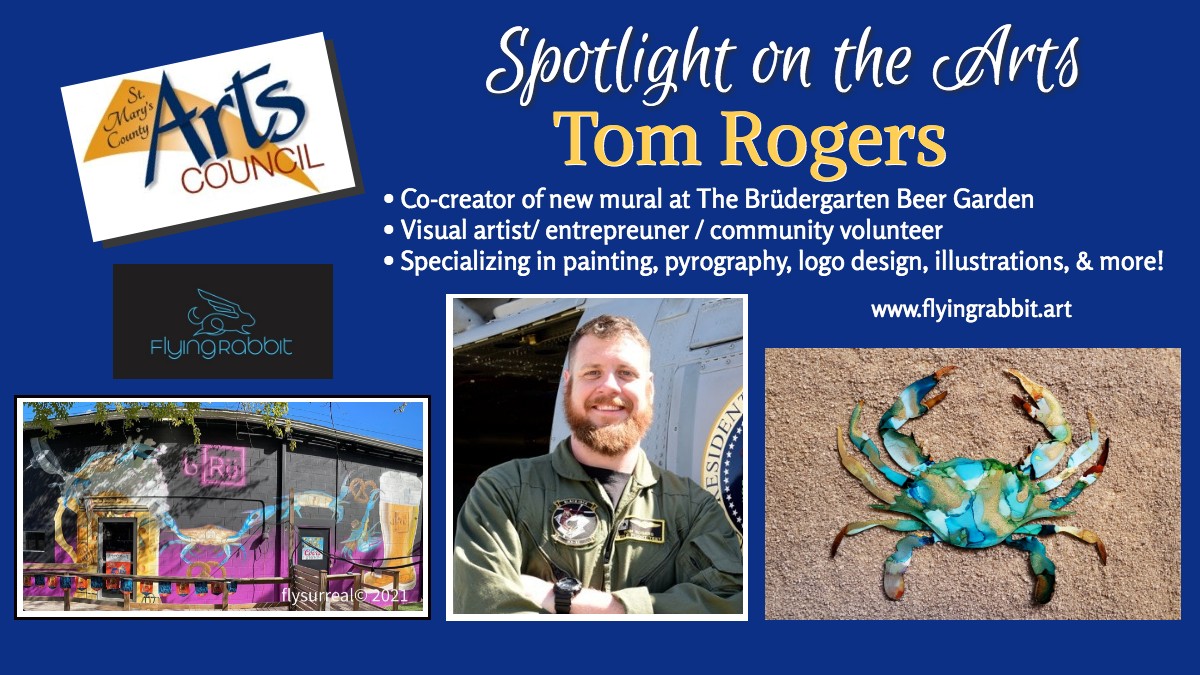 Our spotlight on the arts shines brightly on Tom Rogers!

This project was commissioned on a short notice to coordinate with one of the BrÃ¼dergarten’s favorite annual events. BrÃ¼derfest 2021featuring Weenie dog races, Stein lifting contests, a HydraFX concert, beer of course, and also the unveiling of the fabulous new mural.

Gerrie L’Heureux, owner of Shepherd’s Old Field Market, imagined a locally themed piece reflecting the regional region of Southern Maryland. The beer boots and pretzels have been incorporated based on customer feedback, and the entire design has been tailored to the intricacies of the wall as well as the space available to work inside.

After completing an on-site survey, an original sketch was formulated and drawn digitally. After much more careful consideration (and only two days before the painting process began!), The artists reconfigured their initial plans to better optimize the design flow and layout.

Artists quickly adopted an approach of viewing the project as a series of smaller paintings created in layers to give an appropriate blend with the larger spaces punctuated with intricate detail for balance. A piece of this size can get overwhelming in many ways, so they felt it would be the best course of action.

The painting process was completed in just over four days, with Dan chalking the drawings for proportions and completing large hand-brushed blocks, followed by Tom using the airless sprayer and meticulously adding the most details. purposes.

Originally from Texas, some of Tom Rogers’ earliest artistic endeavors can be traced back to his youth, where he enjoyed drawing colorful cartoon characters, portraits, landscapes and backdrops on the walls of his home (and then drew a lot of problems). While these pre-mural antics weren’t appreciated back then, he always found some kind of artistic element to enjoy as a child, whether it was creating paintings or making them. covering.

Adopted and raised by his great-uncle and his wife, Tom said he lived in a less than stellar situation in his family life. “Art was my expression of this feeling, a way to externalize the internal things that no one knew.”

Rogers said he didn’t do well in school, and just before his senior year he left home and alternated living in his car and just being homeless, which at the time was both terrifying and liberating. Despite his own personal challenges, Tom had a strong desire in his heart to help others.

Rogers made a difficult but conscious choice at the time to work diligently to complete high school. It was during this period that he met a recruiter from the US Navy and discovered search and rescue, finding a vocation with their motto “So Others May Live”.

Rogers enrolled and passed Rescue Swimmer School, a program that at the time had a dropout rate of nearly 80%. , and flags. From those early days of his career, Tom’s active duty career focused on helping others and doing a bit of art at the same time.

While deployed to Iraq, Tom enjoyed illustrating the beauty of the country, the people and sometimes the random objects and landscapes he saw. “I never realized that the few portraits of the inhabitants that I had created and given to them were so precious and yet so dangerous, but they kept asking for them anyway.”

Fast forward a few years: Tom Rogers, call sign “Rabbit,” traveled the world on search and rescue missions and settled in Maryland in 2005. Having fallen in love with the beauty of County of St. Mary’s and simultaneously starting his dream new full-time job both in test and development, Tom felt like he had finally found his “niche”. He also enjoys spending time with his wife and young son as well as volunteering for several different community organizations.

Coming to Patuxent River and working in his current field allowed Tom to follow his passion for problem solving. He’s still able to continue his love of flying, while also helping with technical challenges with the ultimate goal of making a difference for the fleet fighter who is experiencing the same issues Rogers had faced in the past. ‘to help . “

With the onset of COVID-19, Rogers says he was fortunate to be surrounded by brilliant people, eventually collaborating with colleagues and friends to form the Southern Maryland Agile Response Team (SMART). In partnership with the Pax River Naval Air Museum, SMART members were on a mission to manufacture 3D printed face shields for use in our community.

During this time of early pandemic and a particular time of need given global shortages, more than 3,000 face shields have been created and distributed locally at Charlotte Hall Veterans Home, St. Marys County School District and to many other local businesses and organizations.

While busy at work, at home, and as a volunteer, Rogers always finds time to benefit from his artistic endeavors. His various interests include painting, pyrography, illustrations, mixed media and fabrication, patch and logo design, and sculpture design. Inspired by cartoons and movies of the 80s, comics and various cultures across the world, Tom’s art also sometimes reflects mythology and science fiction themes.

Tom and his mural partner Dan Ropp were recently tasked with completing a new project in the heart of Leonardtown’s downtown arts and entertainment district, which is slated to begin later this year and details will be announced soon.

Thank you Tom for being a valued member of our community, we are excited to see your future projects!

Learn more about our featured artist at the links below:

Opening hours and location of the BrÃ¼dergarten Beer Garden: https://www.brudergarten.com/

How can I drive more traffic to targeted landing pages?