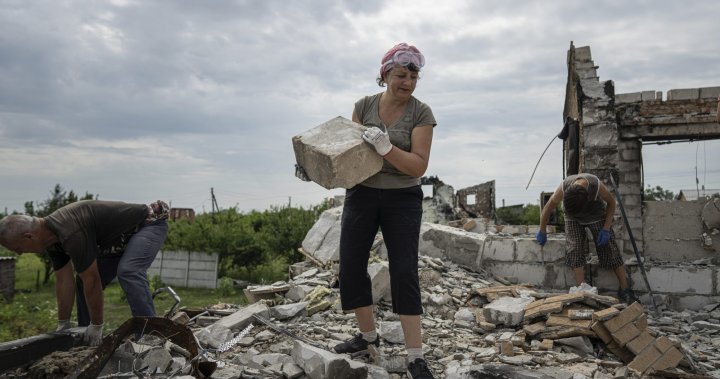 Dmytro Pocishchuk, a hospital doctor in the capital of Zaporizhzhia region who has treated dozens of people injured in Russian attacks in recent weeks, said people had sought safety outside or in the basement of his apartment building when the familiar explosions began at 5:15 a.m. Saturday.

“If Ukraine stops, these bombings and killings will continue. We cannot surrender to the Russian Federation,” Pocishchuk said hours later. He put a small Ukrainian flag on the broken windshield of his badly damaged car.

Russia has lost ground in the nearly seven weeks since Ukraine’s armed forces launched their counteroffensive in the south. This week, the Kremlin launched what is believed to be its largest coordinated air and missile strikes since Russia invaded Ukraine on February 24.


Kyiv Region Governor Oleksiy Kuleba said the missile that hit an electrical site on Saturday morning did not kill or injure anyone. Citing security, Ukrainian officials have not identified the site, one of several infrastructure targets the Russian military tried to destroy after a truck bomb explosion on October 8 damaged the bridge which connects Russia with the annexed Crimean peninsula.

“Putin can hope that by increasing the misery of the Ukrainian people, President (Volodymyr) Zelensky will be more inclined to broker a deal that allows Russia to retain some stolen territory in the east or in Crimea,” said Ian Williams, member of the Center for Strategic and International Studies, a political organization based in Washington. “A quick look at history shows that the strategic bombing of civilians is an ineffective means of achieving a political objective. ”

READ MORE: ‘We are not naive’ about who is behind ‘sabotage’ of Nord Stream pipelines, says Joly

Large-scale retaliatory attacks this week, which included the use of self-destructing explosive drones from Iran, killed dozens of people. The strikes affected residential buildings as well as infrastructure such as power plants in Kyiv, Lviv in western Ukraine and other cities that had seen relatively few strikes in recent months.

Putin said on Friday that Moscow saw no need for more massive strikes, but that its military would continue with selective strikes. He said that of 29 targets the Russian military planned to eliminate in attacks this week, seven were undamaged and would be phased out.

The Institute for the Study of War, a Washington-based think tank, interpreted Putin’s remarks as intended to counter criticism from pro-war Russian bloggers who “widely welcomed renewed strikes against Ukrainian cities, but warned that a short campaign would be ineffective”. .”

1:01
NATO says alliance will further boost support for Ukraine amid war with Russia

The neighboring region of Kherson, one of the first areas in Ukraine to fall to Russia after the invasion and which Putin also illegally designated as Russian territory last month, remained at the center of a counteroffensive Ukrainian.

The Kyiv army reported retaking 75 villages and towns in the past month, but said momentum had slowed, with fighting settling into the kind of grueling back-and-forth that characterized the offensive several months of Russia to conquer the eastern region of Donbass in Ukraine.

On Saturday, Ukrainian troops tried to advance south along the banks of the Dnieper towards the regional capital, also named Kherson, but failed to gain ground, according to Kirill Stremousov, deputy head of the Moscow-based administration. in the occupied region.

“The lines of defense worked and the situation remained under the full control of the Russian military,” he wrote on his messaging app channel.

Local Kremlin-backed leaders on Thursday told civilians to leave the area to ensure their safety and give Russian troops more maneuverability. Stremousov reminded them that they could evacuate to Crimea and cities in southwestern Russia, where Moscow offered free accommodation to residents who agreed to leave.

Maj. Gen. Igor Konashenkov, spokesman for the Russian Defense Ministry, said the army had destroyed five crossing points on the Inhulets River, another route Ukrainian fighters could take to advance towards the Kherson region .

Konashenkov said Russian troops also blocked Ukrainian attempts to break through Russian defenses near Lyman, a town in the annexed Donetsk region in eastern Ukraine which the Ukrainians recaptured two weeks ago. in a major defeat for the Kremlin.

1:05
Putin meets the Emir of Qatar and wishes him luck in organizing the 2022 World Cup


North and east of Kherson, Russian shelling killed two civilians in the Dnipropetrovsk region, Governor Valentyn Resnichenko said. He said the shelling of the town of Nikopol, located across the Dnieper from the Russian-occupied Zaporizhzhia nuclear power plant, damaged a dozen residential buildings, several shops and a transportation facility.

Fighting near the nuclear power plant, the largest in Europe, was a constant concern during the nearly eight-month war. The power plant has temporarily lost its last remaining outside source of electricity twice in the past week, fueling fears the reactors could eventually overheat and cause a catastrophic radiation leak.

International Atomic Energy Agency Director General Rafael Grossi said those fears had eased somewhat on Friday evening, as Ukrainian engineers succeeded after several weeks in restoring emergency power lines that can serve of “buffer” in case of new breakdowns related to the war.

“Working in very difficult conditions, the operating staff of the Zaporizhzhia nuclear power plant are doing all they can to strengthen its fragile offsite energy situation,” Grossi said. “The restoration of the backup power connection is a positive step in this regard, even if the overall nuclear safety and security situation remains precarious.”