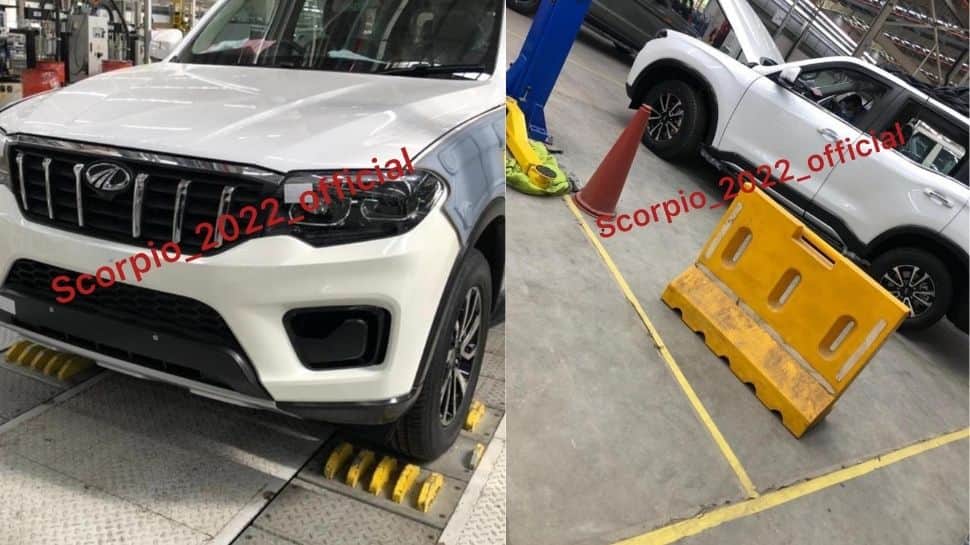 Ahead of the launch of the upcoming Mahindra Scorpio, new images revealing the exterior of the car have surfaced on the internet. It should be noted that this is not the first time that images of the next SUV have been leaked. However, the images leaked earlier were of the car’s camouflaged test mules, barely revealing any design details. The new photos give a clear look at the exterior of the car as it appears to be on the assembly line. Earlier, the company officially revealed the looks through a teaser.

Photos of the car were posted on Instagram by scorpio_2022_official. The images give a clear view of the front of the white color model of the Upcoming Scorpio. Images show the vertically slatted grille with the new Mahindra logo in the centre. It also gets the C-shaped LED DRLs with fog lights in addition to other updates. In the latest iteration, it also gets a new twin-barrel headlight.

Looking closer at the exteriors, a slightly angled chrome beltline rises from the C-pillar, crosses the D-pillar and flows into the rear of the new Mahindra Scorpio. It also gets new wheels, which are expected to be 18-inches in diameter and feature wide, high-profile rubber. Silver inlays will be added to the body cladding on the sides. It also has traditional door handles, as opposed to the XUV700’s flush. -designed.

The new Scorpio will have a revised side-hinged tailgate at the rear. Unlike previous Scorpios, the rear bumper is flatter. Two reversing lights are mounted on either side of the bumper, connected by a chrome strip. A fake rear skid plate, similar to the side cladding insert, is also coated in silver.

The new upcoming Mahindra Scorpio is expected to have two engine options for sale in the form of a 2.2-litre mHawk diesel engine and a 2.0-litre mStallion turbo petrol engine. The engines will be mated to a 6-speed manual or a 6-speed torque converter automatic.