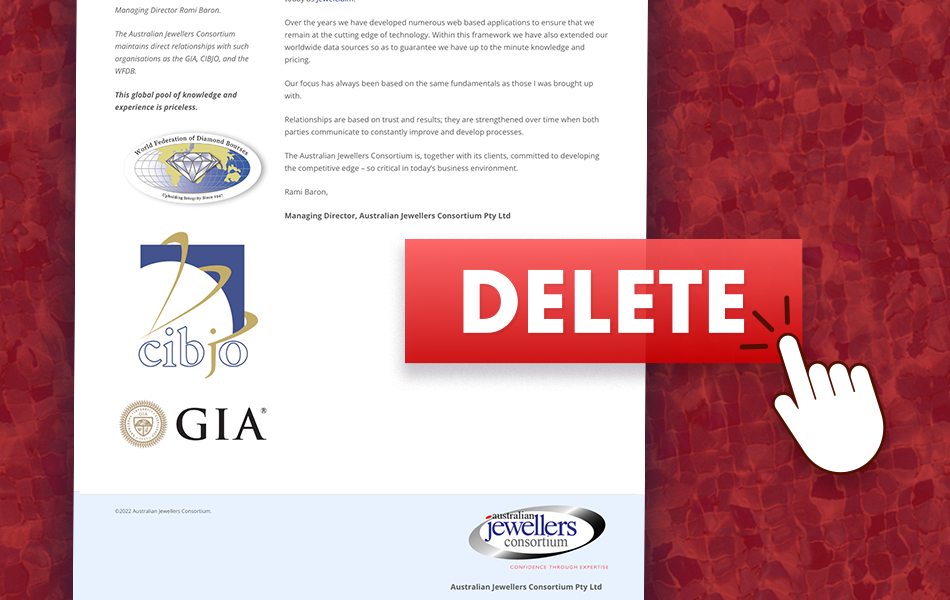 
The logos of two international jewelery organizations have been removed from the website of Jewelclaim, the private company run by Diamond Dealers Club of Australia (DDCA) chairman Rami Baron.

As previously reported, the Australian Baron Jewelers Consortium, also known as Jewelclaim, has been operating since 1996 and, according to its website, has handled “hundreds of thousands” of jewelery claims.

Jeweler learned that Jewelclaim – an insurance claims company – used the imprimatur and logos of the prestigious Gemological Institute of America (GIA), the World Jewelery Confederation (CIBJO) and the World Federation of Diamond Bourses (WFDB).

As well as the logos, the website said: “The Australian Jewelers Consortium has a direct relationship with the GIA, CIBJO and WFDB. This global pool of knowledge and experience is invaluable.

However, Jewelclaim is not a member of the GIA, CIBJO or WFDB and so questions have been raised as to what authority the company should use the international marks and logos, particularly in order to promote its private insurance business. based in Sydney, Australia.

“We are very protective of our logo and our brands. Protecting consumers is our mission, and ensuring that GIA is not misrepresented in any way is an important part of that,” he said.

He added that “retailers who sell gemstones with GIA reports and GIA alumni can request logos for specific purposes. We have no record of a request from Mr. Baron.

Jewelclaim and/or Australian Jewelers Consortium are not jewelry retailers.

CIBJO’s Director of Communications, Steven Benson, explained that CIBJO is a not-for-profit organization that represents all participants in the international jewelry supply chain.

“We didn’t know the CIBJO logo was used by JewelClaim,” he said. Jeweler.

“As a policy [CIBJO] does not authorize the use of its logo to endorse products or services that it did not develop itself,” Benson added.

The GIA and CIBJO logos were removed from the Jewelclaim website after Jeweler published the initial article on the DDCA on Sunday August 15th.

An email three days earlier, on Friday August 12, raising questions about the terms of their use, however, remains unanswered from the DDCA chairman and WFDB executive committee member; it appears that no changes were made to the website prior to the publication of the aforementioned story.

While the GIA and CIBJO logos have been removed, the WFDB logo remains on Jewelclaim’s website even though the company is not a diamond exchange and is not an associate member of the WFDB.

Baron represents Australia on the WFDB Executive Committee as Chairman of the Diamond Dealers Club of Australia (DDCA).

As previously reported, he was chairman of the DDCA for 14 years out of its 15 years of existence, despite his activities in the insurance industry.

When first contacted, Sharon Gefen, WFDB Public Relations Manager, explained that individual companies are generally not members of WFDB because it is a scholarship organization.

She said: “So all member exchanges can use the logo. We have a few associate members, which are companies or organizations, and they can also use the logos. »

background reading: Mystery behind the Diamond Dealers Club of Australia

Although Jewelclaim is not an associate member and although he initially advised that only fellowship members and associate members could use the WFDB logo, Gefen later confusingly stated that “Rami Baron is a valued member of the WFDB Executive Committee and is in close contact with the organization”.

The “close contact” refers to Baron’s claim that he “maintains a direct relationship with the GIA, CIBJO and WFDB” – arguably, something that could be claimed by many people. Following this “close contact”, Gefen added: “We do not see any problem in his [Baron] mentioning this fact on the Jewelclaim website”.

She did not specifically address the use of the WFDB logo, whether the WFDB was previously aware that its intellectual property was being used to promote a private enterprise and/or whether permission had been specifically granted prior to the promotional use.

Clearly the GIA and CIBJO were unaware that their logos were being used for marketing purposes on the Jewelclaim website, and their prompt removal would suggest that Baron/Jewelclaim did not have permission or authority. to use them.

Notwithstanding the apparent contradiction on the use of its logo, Jeweler has since raised other issues with the WFDB that have come to light regarding the DDCA. In turn, the WFDB advised that their office is closed for summer vacation and they will respond in due course.

As previously reported, the WFDB About Us page reads: “As the industry’s most important representative body, the WFDB advances the principles of trust, transparency and integrity among stock exchange members and in the industry as a whole. [bold emphasis added]

More reading
Mystery behind the Diamond Dealers Club of Australia