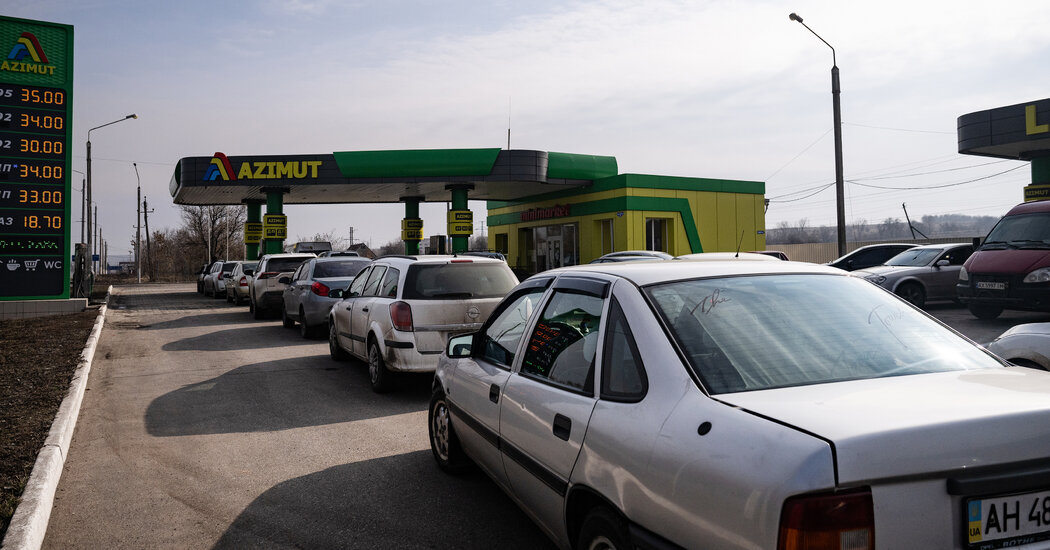 ‘I gave up everything and left’: Ukrainians flee Russian advance

“He said, ‘Get out now.’ And that’s all the time he had to talk,” Mr. Kalashnik said. “We haven’t heard from him since.

In the few hours on the road, he said, he was stunned by the rapid military action that seemed to be reshaping his country, minute by minute.

“As we were riding, so many things changed,” he said.

Along the way, he said, he called his grandmother living near the Russian border south of Kharkiv, a city in eastern Ukraine partially surrounded on Thursday. Russian soldiers had already arrived, he said she had told him, and added: “There is a tank in my garden.

Ms Danyliuk, a 65-year-old pensioner, and her husband, Bogdan, lived in Shchastya, a town along the line separating government territory from a separatist enclave in eastern Ukraine, where she was a volunteer active in a children’s theater group. . She also woke up on Thursday to a bombardment.

Understanding the Russian attack on Ukraine

What is behind this invasion? Russia sees Ukraine as part of its natural sphere of influence, and it worries about Ukraine’s proximity to the West and the prospect of the country joining NATO or the European Union. Although Ukraine is not part of either, it receives financial and military aid from the United States and Europe.

Are these tensions just beginning now? The antagonism between the two nations has been simmering since 2014, when the Russian military entered Ukrainian territory, after an uprising in Ukraine replaced their pro-Russian president with a pro-Western government. Then Russia annexed Crimea and inspired a separatist movement in the east. A ceasefire was negotiated in 2015, but fighting continued.

How did Ukraine react? On February 23, Ukraine declared a 30-day state of emergency as cyberattacks destroyed government institutions. After the attacks began, Volodymyr Zelensky, President of Ukraine, declared martial law. The foreign minister called the attacks a “full-scale invasion” and called on the world to “stop Putin”.

“We packed in panic,” she said in a phone interview from the road. “I was afraid to turn on the light. I decided to take a shower, while I had the chance. We packed documents. But I didn’t bring the family photos. They were in a big box. There would be no place for them.

She said she later regretted that decision. In the end, she took another spare wheel.

“I should have left yesterday,” she said. “Today I gave up everything and left.”

She planned to stay with her son in Kiev, although he lives in a one-room apartment, but she also realized that Kiev was not safe either. Before leaving, she and her husband spread food on the ground for their chickens, then let the birds roam – possibly, in street fights.