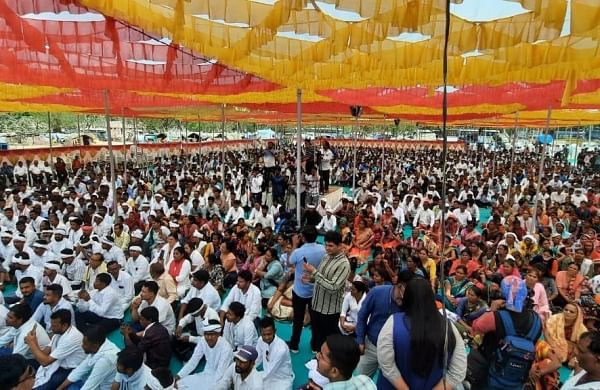 AHMEDABAD: Ahead of Gujarat assembly elections scheduled for December this year, the state’s BJP government is facing heat from the opposition on a host of issues.

The protest against the Centre’s proposed Par-Tapi Narmada river link project in South Gujarat seems to be gaining momentum by the day. On Friday, more than 10,000 tribals in 50 buses and small and large vehicles reached Gandhinagar Satyagraha Chavni (camp) to stage a protest.

Congressman and Tribal Leader Anant Patel said, “Our community has been fighting for its existence for centuries. At present, the condition of the tribals is very bad. Justice is denied us. Water supply is not available for the tribals even though the river crosses the tribal area. There is no electricity. The government cancels the debts of the industrialists, but does not provide jobs for the young people of our community. We will fight even if we have to fight like Birsa Munda.

Congress attempted to gherao the State Assembly building above the Par-Tapi Narmada River Link Project, but the protesters were stopped by police.

Meanwhile, farmers in the district drove tractors to the village of Pethapur to stage a protest. But the police stopped them halfway. Bhartiya Kisan Sangh (Indian Farmers Union) warned that if the agriculture energy crisis is not resolved within 72 hours, there will be statewide unrest.

Reacting to the farmers and Congress protests, Gujarat Government Spokesperson and Cabinet Minister Jitu Waghani said, “The state government is with the farmers. The necessary arrangements are made to ensure they have an adequate power supply. Congress has no choice but to provoke the farmers. The BJP state government has introduced various schemes for farmers. Only 51,551 agricultural electrical connections were provided from 1960 to 1995 while 14,63,739 agricultural electrical connections were provided from 1995 to 2022.”