From alleged ANC subversion to a broken pylon: How the FNB’s acacia logo annoyed SA

South Africa’s First National Bank (FNB) has released its biggest logo change in 35 years, and it’s being laughed at. But despite a slew of criticism online, the new logo is significantly less controversial than its first iteration, which some say secretly and subversively hid ANC symbols, a map of Africa and an assault rifle in its branches.

FNB has roots dating back to the Eastern Province Bank of 1838, giving it strong ties to the nation’s oldest bank. But it only became First National Bank and adopted its first acacia logo when UK’s Barclays Bank divested in 1987.

Despite its long history, FNB has done very few major logo redesigns, with its most notable changes after its launch logo occurring in 2000 and 2005.

The first version of her acacia logo appeared alongside her 1987 name change, an apparent attempt to localize her image as she split from Barclays in the UK.

Author Arthur Goldstuck, who wrote about the FNB logo in his 1999 book The aardvark and the caravansays the process of changing the name and introducing the new logo cost the bank around R45 million at the time.

Goldstuck says the bank chose “a very simple symbolic logo” that “featured a thorny tree, silhouetted against a rising sun.” The intention at the time, he says, was to symbolize an African landscape and a new dawn, and it came with a tagline reading “Symbol of Life, Strength, Hope”.

Shortly after FNB unveiled its new acacia logo in the late 1980s, controversy spread that the bank had sneakily hidden several symbolic emblems among tree branches. Although high-resolution copies of the original logo were unsurprisingly hard to come by (and FNB couldn’t immediately provide one on Friday), given the controversy, the supposed symbols were still somewhat visible in logos until 2000.

The least controversial of these was a map of Africa. But soon, the public pointed to other possible symbols, including a possible assault rifle. And what could have been a rabbit, or a hare, which some claimed was a reference to the apartheid government driving out ANC members. 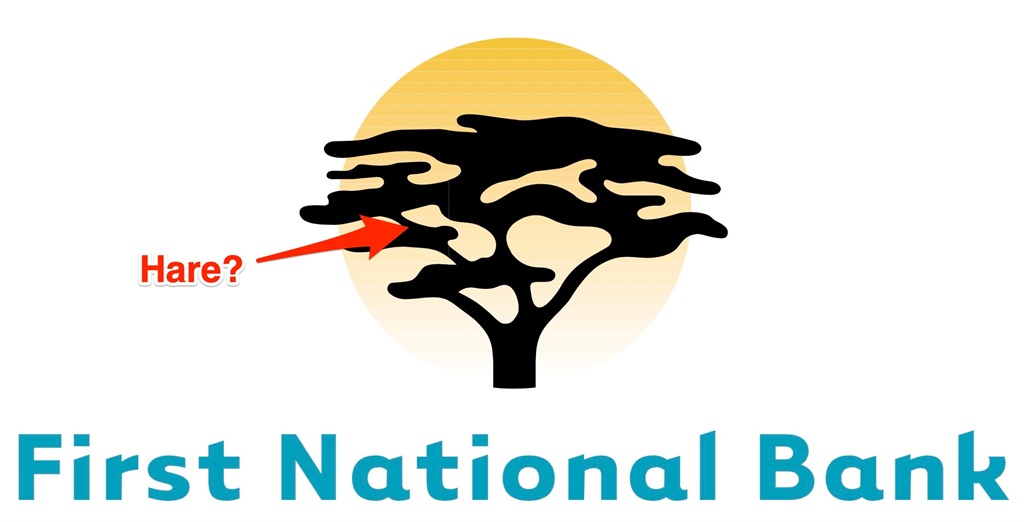 Images of the supposed hidden images were broadcast by fax, in an early example of electronic means allowing a meme to travel through connected parts of South African society.

Even before that, the FNB already had the reputation of “the ANC bank”. This was due to the outspokenness of general manager Chris Ball appearing on BBC radio with ANC representatives. And, according to Goldstuck, because the bank allegedly offered a loan to a Johannesburg businessman, who used the money to run newspaper ads calling for the lifting of the ban on the ANC.

At the time, FNB denied deliberately inserting subversive symbols, even that of the African map, into its acacia branches. And in his book, Goldstuck apparently concludes that the belief that FNB deliberately chose to insert these symbols into its logo was likely an urban legend and mere coincidence.

Despite this, the bank slightly adjusted its logo soon after the initial controversy to reduce the clarity of the apparent symbols and further distance itself from the concerns of the apartheid government.

But in a reversal in the early 2000s, the bank reversed its position and deliberately incorporated African insignia into its 2005 logo. According to internal branding documents, FNB highlighted an outline of the African continent among its acacia branches. The doc says the subtle map “reminds us of where we are” and “is a helpful guide to help us keep our logo the right way around.” According to Faye Mfikwe, Chief Marketing Officer of FNB, the 2022 logo refresh “helps us create a versatile brand look that aligns with our accelerated transition to help customers beyond banking into the style solutions categories. life and business”.

Instant comments on its new logo suggest that FNB’s move away from its more organic acacia roots, at least when it comes to its logo, isn’t a particularly good thing.

Some on social media said it looked like an electricity pylon, the universal Wi-Fi symbol, and had similarities to the Spotify logo.

The Apple logo: a story