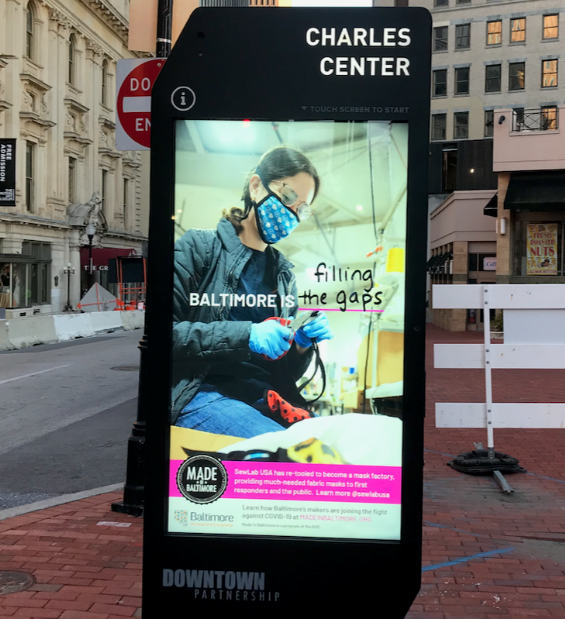 DesignFest connects design students and professionals with nonprofits in need of new logos, websites and more

PIVOTa Baltimore nonprofit that works with women returning to their communities after incarceration, wanted to refresh their logo but didn’t know where to start.

The organization created its original logo itself with a free basic design program in 2018. But the logo looked “very austere and rather bold,” said co-founder Emily Thompson, and it didn’t. channeled the healing that the nonprofit strives to foster. .

PIVOT finally learned of the existence of Basic Design Festival, which connects art, design, and business students and professionals with Baltimore-area nonprofits in need of new logos, branding, or other projects. The annual event, which is hosted by the Maryland Institute College of Art (MICA) and investment firm T. Rowe Price, provides this design work at no cost to nonprofit organizations.

The organization applied to DesignFest, was accepted, and worked with a team of designers to rework their logo last year. The non-profit organization returned this year for additional assistance with its website.

Sheri Parks, vice president of strategic initiatives at MICA, said many nonprofits focus on providing services to their communities but don’t think about how to effectively communicate their identity and mission to outsiders. to this already established community.

“Sometimes if you’re reacting to a problem, you don’t have time to think about it. You go straight into the trenches,” Parks said. “You need something like DesignFest to stop and say, ‘How do we explain what we’re doing to people who aren’t already in the trenches with us?'”

John Brothers, president of the T. Rowe Price Foundation, said some nonprofits have a “storytelling problem” because they lack the design infrastructure to tell their story.

But Baltimore is home to great institutions, like MICA, T. Rowe Price and others, that can share their infrastructure and “help Baltimore in a better way,” Brothers said.

“I think what we’re hoping for is that there are other ways that Baltimore business steam, Baltimore anchor institutions, Baltimore being a college town – how can we use steam of these institutions to raise and build this very large reservoir of social agents of change in the city? ” he said.

DesignFest has facilitated about $1 million in volunteer work, Brothers said, allowing nonprofits to better focus on the communities they serve.

While DesignFest focuses on storytelling, Brothers hopes Baltimore institutions can also help nonprofits in other areas, such as finance, service delivery and customer service.

In the case of PIVOT, DesignFest gave the nonprofit the opportunity to rebrand.

The association’s original logo featured the name “PIVOT” in white letters on a purple background, or sometimes the reverse. For the update, they “wanted something that represented the caliber of organization that is PIVOT and was just a bit more professional,” said Thompson, who added that they wanted to keep their signature purple color to maintain some continuity.

She added that the font of the old logo was reminiscent of the bars behind which formerly incarcerated women were locked. PIVOT wanted to revamp its logo to highlight how far women have come.

“That’s the past and what we want to focus on is the future for our participants,” Thompson said.

Alani said the design team, which included a mix of design professionals and students from multiple schools, wanted to create a logo that would appeal to various types of stakeholders.

“We realized that the logo they were looking for was not only important to get out there to donors and funders, but it was also something that needed to resonate with the primary beneficiaries of the work of PIVOT,” he said.

The team also wanted to make sure the logo used an open-source font that the association would be free to use for other projects, and would still be recognizable when reproduced on a black-and-white copier.

“It’s not just about connecting these limited vital services,” he said. “It’s about building communities, which tries to alleviate this very difficult, empowering and isolating experience.”

Alani added that “community can help reshape identity and allow people who have been through these systems to reconcile those identities.”

The design team developed and presented several logo options to the nonprofit, which then asked its staff and program participants to provide feedback and vote for their favorite.

“It was very empowering for everyone to know, not only that everyone could weigh in and have a voice, but also to know that the choice we were making had a reason,” Thompson said.

The logo that PIVOT ultimately selected features a pair of light purple hands forming a heart, next to the association’s name in solid, dark purple letters.

But the nonprofit quickly ran into another problem. They expected to be able to just replace the old logo with the new one wherever it appeared on the website, but it looked “very disjointed,” Thompson said.

Creating a professional and recognizable brand was particularly important as PIVOT plans to expand its reach by providing more housing support and pre-release services for women before they return to their communities. The association is currently working with a cohort of 15 women per quarter, or 60 per year, who have recently been released or are returning from incarceration.

Thompson said PIVOT was drawn to DesignFest by the thoughtfulness and connection of their design team last year.

“We were so impressed with the caliber of designers that DesignFest brings together,” she said. “I think it’s not just the design services we’ve received that have been so beneficial, which we would never have been able to afford otherwise. But also, each designer brought a lot of care and passion and felt connected to our cause.

Alani also returned to DesignFest this year, working on a team that helped Weekend Backpacks, a Baltimore nonprofit that provides weekend meals to food-insecure children.

Alani said her coaching experience at DesignFest 2021 was key to her journey as a design professional, providing her with “experiential learning opportunities where you can really get into mission-driven work”.

At last year’s event, he was able to share his knowledge of design strategy, while another team member gave him an introduction to visual prototyping tools.

“It’s real time,” she said. “It’s a real nonprofit that looks you in the face and says, ‘I’ve got a problem. Help me fix it.

“Whether someone comes to you with a real-life problem and asks you to be part of the solution because of your skills…there is an emotional, social and professional reaction that occurs at DesignFest that is intangible. and yet very, very real,” Parks added. “Students leave so happy and so proud to really understand the work of the skills they are learning. It’s priceless.

Marcus Dieterle is the editor of Baltimore Fishbowl. He returned to Baltimore in 2020 after working as associate editor of the Cecil Whig newspaper in Elkton, Md. He can be reached at [email protected] or on Twitter at @marcusdieterle.