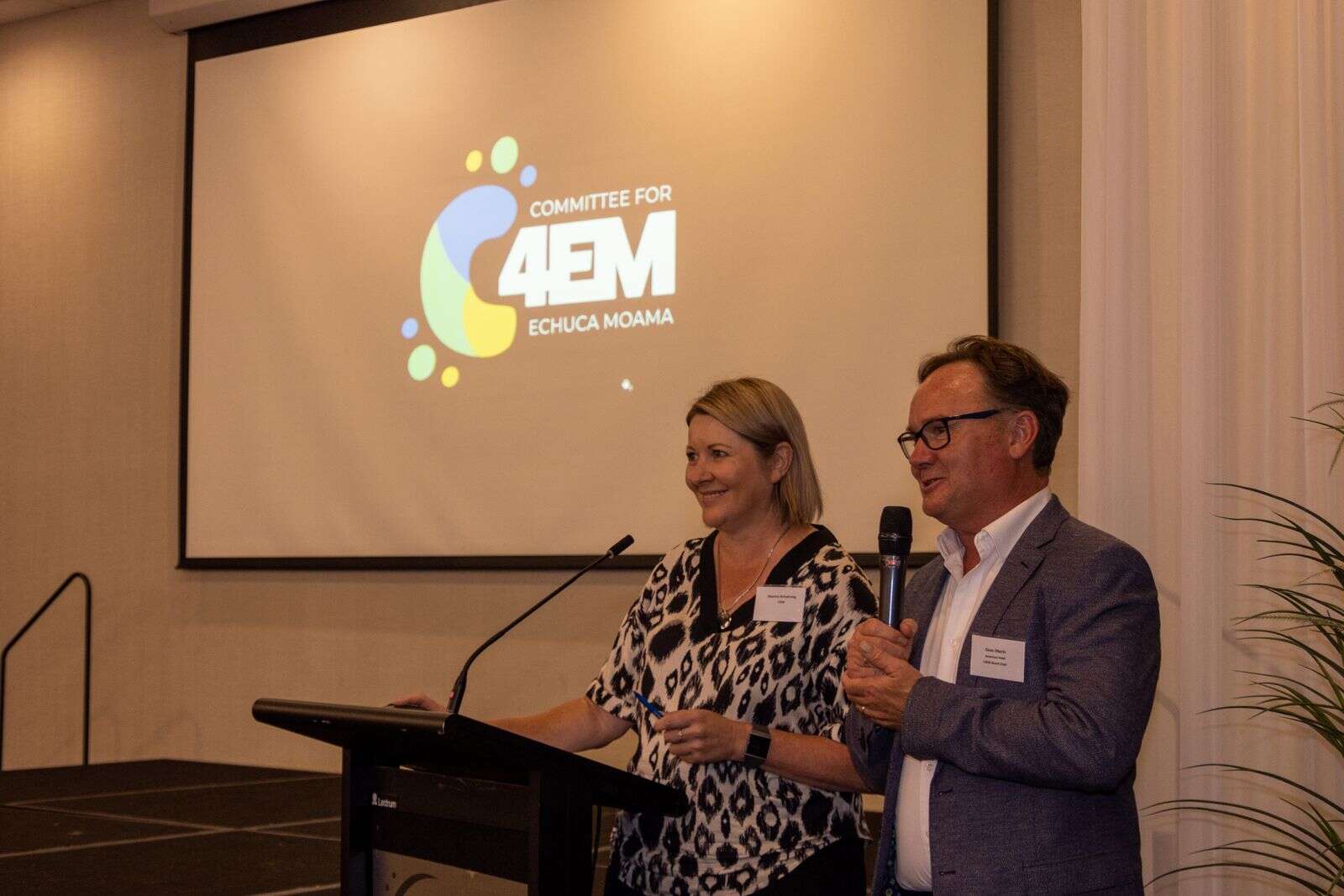 Collaboration seems to be the new buzzword in the riverside community after a new logo representing the close ties between Echuca and Moama was unveiled as the Committee’s new symbol for Echuca Moama.

For the past six months there has been a joint meeting of Campaspe Shire and Murray River councils preceded by a call from Murray River Council chief executive Terry Dodds for the councils to present a united front in the possible.

The C4EM organization took the same hymnbook and incorporated the close bond of the two communities into the design of the new logo.

C4EM chief executive Deanne Armstrong said the idea behind the logo was to create a feeling of water, land and the environment.

“The dots mean collaboration and the ‘EM’ together allows us to further promote Echuca-Moama as one community,” she said.

It was created by Jason Clymo, director of J2 Content Creation, who had an important role to play in the evening.

He provided the expertise behind the planning, development and Wednesday night launch of Dare to Dream.

Dimity along with Dottie Wilson, Tara Arlow, Grace Andrews and Amanda Mitchell provided content for the video, designed to promote youth participation in decision-making and the region’s future.

The Dare to Dream video will eventually be available on the C4EM website.

“We hope to promote the video to youth groups and other community organizations. All five girls will continue to receive support from C4EM,” Ms. Armstrong said.

C4EM President Dean Oberin, in his report to the Annual General Meeting, said the group had evolved and changed since its inception.

He said the next step was to strengthen his footprint, which would be done with an expansion of his staff and involvement in other areas of the community.

“But the group is currently as strong as ever. Membership is an indication of a group’s relevance and ours is in a dynamic position.

“Our engagement with local government is healthy and we have not only survived very difficult times, but also remained optimistic and confident about the future,” he said.

Mr. Oberin said the organization was in an extremely sound financial position, which would be a launching pad for his ongoing work at Echuca-Moama.

Ms Armstrong said creating a collective for manufacturing organizations and successfully partnering with the Love Me Love You organization – throughout its Welfare Warrior mental health program – topped her list of accomplishments over the course of of the last 12 months.

“We hope to be able to add the installation of CCTV cameras to this list in the not too distant future,” she said.

Alongside the Fairley Leadership Program, which culminated in the creation of the Peter Marks Fellowship, in honor of the former Foodmach partner, there has been a long list of developments in 2021.

“Our partnership with Rich River for the Charity Golf Day has continued to thrive and our new website should be up and running shortly,” she said.

Ms Armstrong said there were several smart business people involved in C4EM and finding opportunities for the group would be a priority.

“Going forward, we plan to open the doors of the events we host to non-members, which we hope will attract new membership opportunities,” she said.

Weighty issues: A dilemma of diets