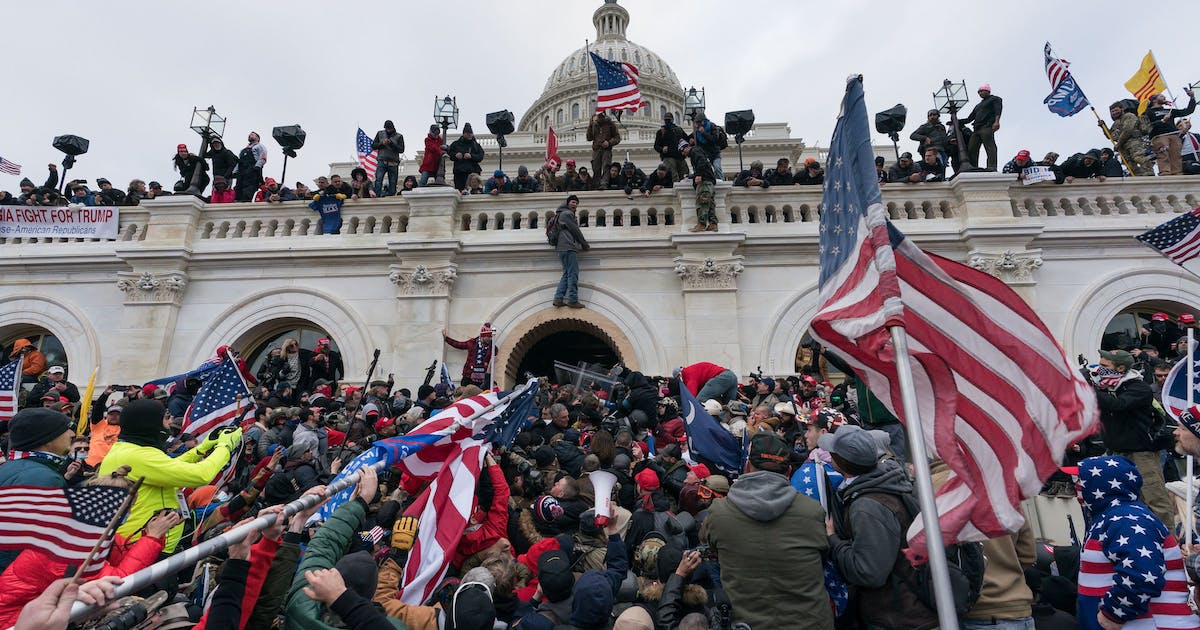 There is a point in every disaster movie when the heroes put aside their differences and face the real threat, united. The oncoming asteroid. The sharknado. The violent mob trying to overthrow our democracy.

The insurgency took place a year ago today. Violent mobs made their way into the United States Capitol, screaming at lawmakers to overturn a legitimate election, encouraged by the president who had just lost.

They waved Blue Line flags and beat the Capitol Police with flag poles. They zipped through the galleries of the Senate, looking for targets. They plastered the walls with excrement and ropes hanging from trees and scaffolding.

The crowd crushed one of their own to death, Roseanne Boyland, as he entered a tunnel on the west side of the Capitol. Video of bystanders desperately performing CPR captured a neighboring Minnesota family, rubbing tear gas out of their eyes and preparing for another push inside. Another video would reveal two of this Lindstrom family trying to force their way through police lines with stolen riot shields.

January 6 should have changed everything.

But another year more and deeper in denial, America cannot even agree that the bloody undemocratic insurgencies qualify as a disaster.

“I would definitely call this some kind of disruption,” Minnesota Republican Party Chairman David Hann told the Star Tribune. “But I didn’t spend a lot of time thinking about it, and I don’t know anyone other than the Democrats and I guess the media.”

To date, the Lindstrom family has raised over $ 37,000 to reach their goal of $ 250,000. They have legal bills to pay. The FBI followed a series of videos and proud social media posts to arrest Robert, Jonah and Isaac Westbury and Aaron James on an assortment of federal charges.

“Please pray the truth will counter the lies of the lamestream media,” wrote family matriarch Rosemarie Westbury in an article on the crowdfunding site to which I will not be linked. “My sons have NEVER attacked and would NEVER have attacked anyone, especially a police officer?”

You can see what the Westbury’s and James did on the Capitol in the Star Tribune’s Stephen Montemayor’s cover, in an in-depth look at The death of Roseanne Boyland by The New York Times, and in images scattered across the Internet.

Fundraising for the family got a boost from Minnesota State Senator Mark Koran of the R-North branch, who – contrary to Hann’s claim – had something to say about the events. January 6. In October, Quran urged his supporters to donate to the Westbury Legal Defense Fund, in an article which is no longer available on his public social media account.

â€œHere is a local family in Lindstrom who may need help,â€ wrote Koran, who did not respond to a request for an interview this week. â€œThey attended the rally on January 6 and were charged and charged with various crimes. Some very serious and others just seem to punish opposing views. All I ask is that they need to ‘help to mount a fair defense against an authoritarian justice ministry. They make a good family! “

A year after battered Capitol Hill police pulled Roseanne Boyland’s lifeless body from the feet of the crowd, a majority of Americans told Associated Press pollsters that the events of January 6 were “very violent” or “extremely violent”.