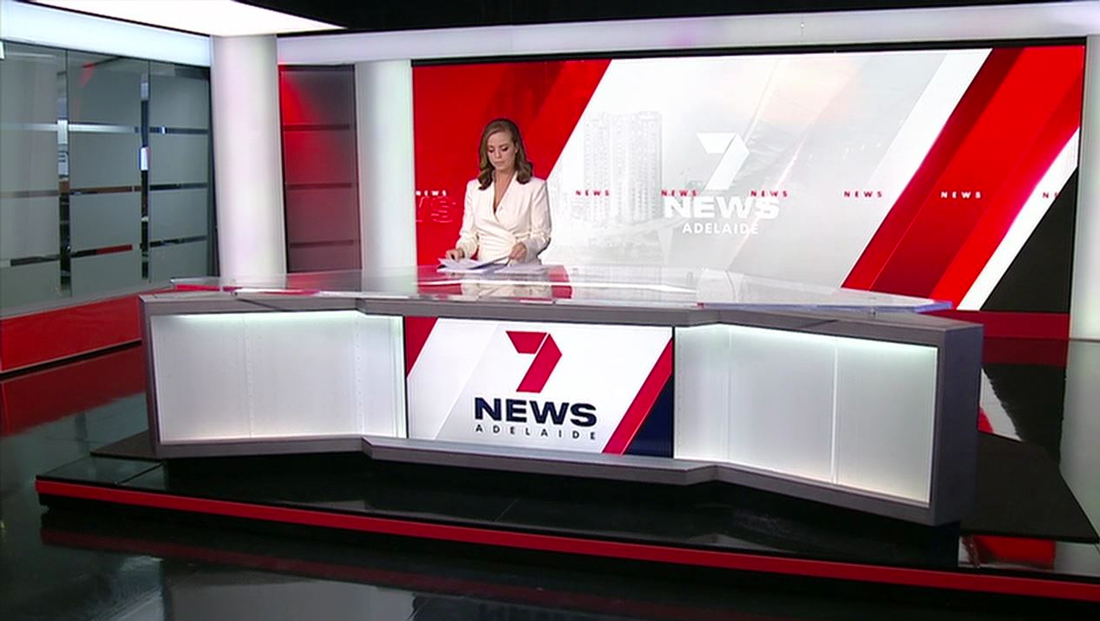 Australian network Seven Network has updated its various newscasts with new graphics and updated sets that take advantage of a flatter, angular design that deviates significantly from its old look.

7News, under its brand, produces both national news shows as well as local newscasts and shows, all moving to the new graphics package and receiving varying degrees of updates.

See the full version on Giphy

Previously, 7News sported a blue and red color scheme with heavy use of glassy angular elements that also frequently enlarged the background image behind them.

The new broadcast design package retains red, which features prominently in the network’s signature geometric “7” icon, but blends it with black and white instead.

See the full version on Giphy

The angular pattern, which is inspired by the icon “7”, remains, but it is now presented in the form of gradient or solid color elements, sometimes with a semi-transparent appearance.

For the new design, the network logo remains in the lower right corner as a bug, and many insert graphics move to this side of the screen as well.

Title banners moved from lower left to lower right and feature an angled black segment on the far right behind the bug. There is a red angled element separating it from the white gradient space provided for the two levels of text, which are set to red and black, which appears to be the same geometric sans serif as the grating used previously.

The design notably keeps both levels of text aligned to the right, rather than trying to align them at an angle – which, in this case, would cause the top line of text to be more to the right than the one below.

Lower thirds identifying individuals are also placed further to the right of the screen, increasing as needed to accommodate a person’s name or text in the second tier. It also adds the black slanted element behind the bug with the two levels of left-aligned text separated by a gradient effect.

The network also has the option of inserting ticker-style tape above the bug and part of the lower third.

For story banners, a more traditional full-width style is used and may also include an additional angled element to the left of the black bug box for franchise branding.

Both types of lower thirds have the ability to animate or move between them, with the effect using side-by-side animation with angled accents.

Apertures and other full-screen elements such as stingers maintain the same look and color palette and use a variety of tilt animations combined with zoom effects.

Openings can be located through portions of the screen that become windows for peeking geographic imagery.

There are hints of vitreous elements playing with perspective mostly in the openings, though it seems to be more of an accent rather than a main feature.

In addition to the dark gradients used between the slanted segments, the wrapper also incorporates the effect of a slightly beveled edge hit with a bright light as well as angular highlights of text hitting the light.

One thing that hasn’t changed is the musical suite’s familiar signature use of “The Mission” with the movement of the same name, originally commissioned by NBC News in the US and composed by John Williams.

7News and “NBC Nightly News” now use different variations of the move, though the signature is still very audible in both.

Slanted boxes and lines can be used to draw attention to the latest news labels, while slates with all-red backgrounds, white text and black accents are available to add a more eye-catching look. just like for the “exclusive” stingers.

Text used in openers and stingers is usually given a slightly 3D effect, but it’s still quite subtle.

Many network studios have large video walls which, as before, are used for OTS-style news graphics. These graphics have also been updated to match the graphics package.

These designs use layers of angled elements, including the use of glassy effects again, to frame the news images behind the anchors.

They also have room for on-screen text in a variety of layouts, although at least one line is usually shown against a slanted but square element on the opposite side while the second tier is a simple rectangle.

There are also multiple formats for compositing the images used, including the ability to use a single image across the entire chart or combine background elements with a single, more visible icon or image.

Often video wall backgrounds are monochromatic, but there are times when more color is used in designs.

For studios without large video walls, an overlay-style OTS is available, which displays as a solid rectangle that takes up just under half the screen.

Angular frames and text containers are replicated in this look, although the more vertical nature of the digital canvas makes it a bit more difficult to insert a more dramatic design with prominent text.

In addition to news video wall graphics, there are also generic looks available which tend to stick more to a white design with subtle gray cityscape views and a white version of the 7News logo with the region name. It is also possible to use local city images as the main anchor background.

Since 7News produces newscasts and local bulletins from disparate locations, there have always been variations in the sets it uses, although many of them have been updated from various ways to incorporate more white and red, including the use of clean, backlit frosted lightbox frames and other rectangular elements.