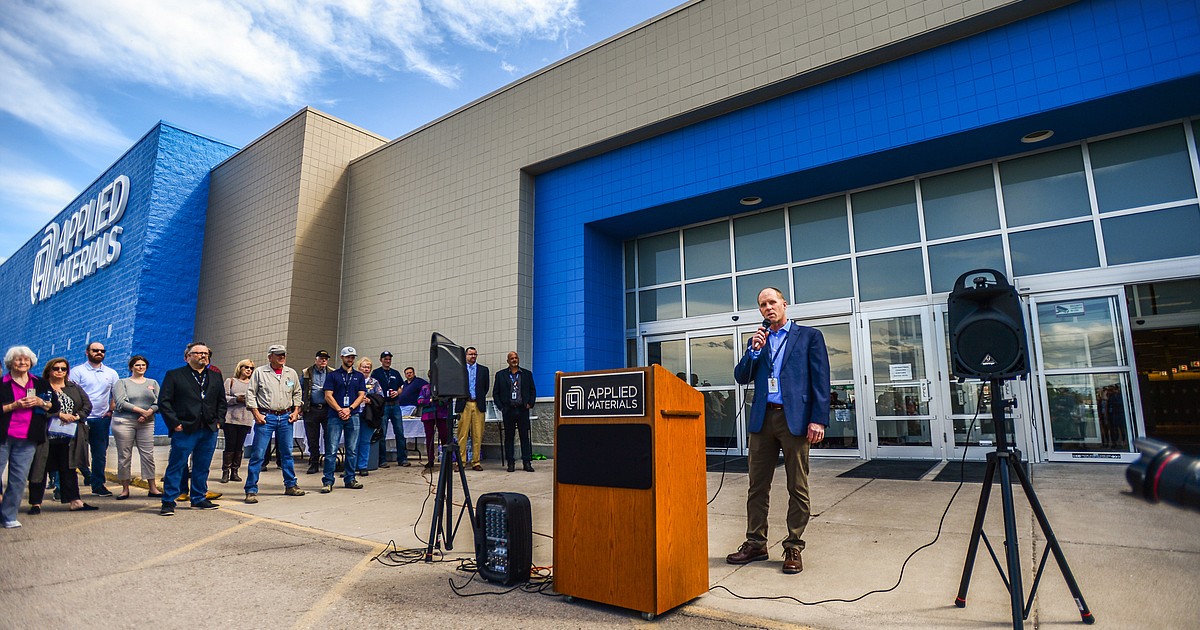 Beneath a giant depiction of the newly affixed Applied Materials logo on the former Shopko building in Evergreen, elected officials, business leaders and corporate bosses officially marked the company’s latest venture in the Flathead Valley on Wednesday.

The manufacturer’s Evergreen plant is expected to create up to 200 jobs in the region. News of the expansion, eagerly awaited by local authorities and business organisations, first broke in the autumn of last year.

This anticipation was visible well before the release of the giant scissors on Wednesday afternoon.

“Thank you for investing in our community, creating jobs and being such a wonderful partner,” said Lorraine Clarno, President and CEO of the Kalispell Chamber of Commerce.

She was one of many to praise Applied Materials, which has two other facilities in the Kalispell area. The company operates a local headquarters on West Reserve Drive and a packing plant on Birch Grove Road. It employs around 600 people locally and over 28,000 worldwide.

“I commend Applied Materials for making this investment in our community,” said Kalispell Mayor Mark Johnson, who described the remodeling of the Shopko building as a “second chance, a rebirth.”

“I want to thank you from the bottom of my heart,” he said.

Gary Mahugh, president of the Evergreen Chamber of Commerce, said he was delighted to welcome the multinational to the neighborhood as he headed into retirement.

“We are so happy to have Applied Materials here to fill a building that has stood empty for the past few years,” he said.

THE SPECIAL ONE retail store will now produce the equipment needed to manufacture semiconductors. Brian Aegerter, the company’s general manager, said products made in Flathead County will be shipped around the world. These products include subcomponents for other equipment manufactured by Applied Materials, which has facilities in Japan, Israel, India and Europe.

“We’re here to stay; we’re here to grow,” McHaffie said. “Thank you for making this place our home.”

The work to transform the one-off point of sale is continuing. Although largely vacant, the cavernous interior houses a few rows of lockers, a handful of computer terminals, and several gear aisles. Aegerter said he plans to employ mostly skilled hourly labor at the facility, describing the work as physical assembly.

During his remarks to the assembled dignitaries, he said Applied Materials’ only limitation to future expansion in the region was the human capital available.

“Our growth potential is limited by the number of people we can bring to the valley,” he said.

Afterwards, Aegerter said the company has seen renewed interest from job seekers. He said the number of potential workers showing up at job fairs has also increased. Many live locally, Aegerter said.

Brendan Beatty, director of the state Department of Revenue and one of two representatives for Governor Greg Gianforte present at the groundbreaking ceremony, praised Applied Materials for bringing jobs to the area.

It may also help Montana retain some of its homegrown talent, Beatty said. In June 2021, the Gianforte office launched something of a repatriation campaign with the unveiling of the Come Home Montana website. While targeting former residents now doing remote work — giving them the option to relocate — the website also includes a link to local job postings across the state.

“For a long time, our greatest export has been our educated children with their Montana values,” Beatty said.