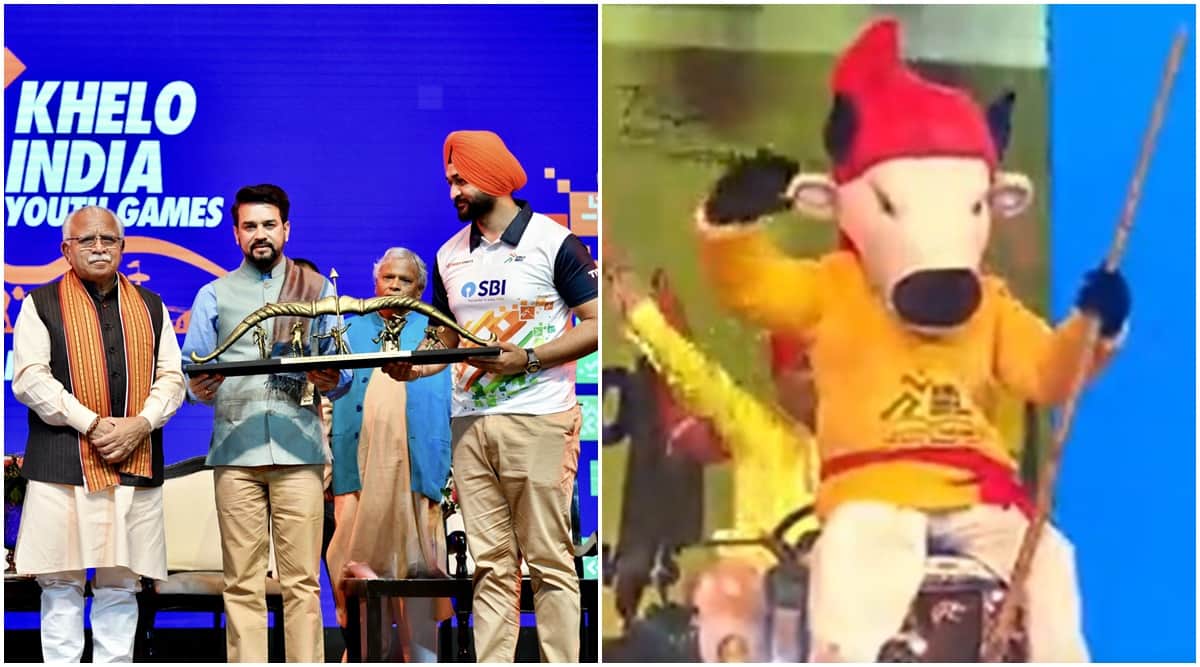 Union Sports Minister Anurag Thakur on Saturday launched the ‘Dhakad’ mascot along with the official logo and official shirt of the fourth Khelo India Youth Games in Panchkula and hailed Haryana’s efforts to host the games.

Thakur was accompanied by Haryana Chief Minister ML Khattar, Haryana MP CM Dushyant Chautala and Haryana Sports Minister Sandeep Singh during the ceremony. Last week saw the conclusion of the Khelo India University Games and Thakur was of the view that Haryana would set an example by hosting the fourth edition of the Khelo India Youth Games from June 4-13 in Panchkula and other cities.

“The mascot of the games is ‘Dhakad’ and I’m sure these games will be Dhakad too. Khelo India Games is the brainchild of Prime Minister Narendra Modi and his vision of how to move India forward in sports. The Khelo India University Games in Bengaluru saw the participation of over 3,500 players and a total of 7,500 players and officials.

“The fourth edition of Khelo India Youth Games will see over 8,500 participating players. While there were two traditional games included in KIUG, we have introduced five traditional games like gatka, thang-ta, kalarippayattu, mallakhamb and yogasana in Khelo India Youth Games Apart from this, the players will show their talent in 20 sports disciplines,” Thakur said at the ceremony.

The games were previously scheduled to take place in October-November last year before being postponed to February this year due to the Covid-19 pandemic. The games, which are to be held in 25 sports disciplines, including five indigenous disciplines, will take place in Shahbad, Ambala, Chandigarh, Panchkula and Delhi.

“During the Khelo India University Games last week, we saw two national records broken along with 20 other records. Swimmers Srihari Nataraj and Maana Patel and many other players showed their talent in the Khelo India games and went on to compete globally including the Olympics.The Ministry of Sports spends over Rs 144 crore on training 2,300 athletes from Khelo India and our endeavor is to provide opportunities for everyone in the country. I am sure that the fourth edition of the Khelo India Youth Games will also see many records broken with the emergence of new talents. I wish all the players good luck in participating in the games,” Thakur added.

5 traditional games Gatka, Thang-ta, Yogasana, Kalaripayattu and Mallakhamb will be included in the 4th #KheloIndiaYouthGames will be held in Haryana.

Haryana CM ML Khattar urged all departments to function properly in order to make the games a success. “While the fourth edition of the Khelo India Youth Games has been postponed earlier, the extra time has given us more time to prepare. With 28 days left until the games start, all the infrastructure and preparations have been done. and we welcome players from all over the country to give their best. I also urge all departments as well as the athletic department to work in tandem and make these games a success,” Khattar said.

Haryana Sports Minister Sandeep Singh also wished the players. “The matches are finally taking place after the delay due to Covid-19. The Khelo India Games inspire confidence in players and I thank Prime Minister Narendra Modi and Union Sports Minister Anurag Thakur for giving Haryana the opportunity to host such games. This is the first time for Haryana to host the national games and we will ensure that it is a memorable experience for the players as well as the officials,” Singh said.