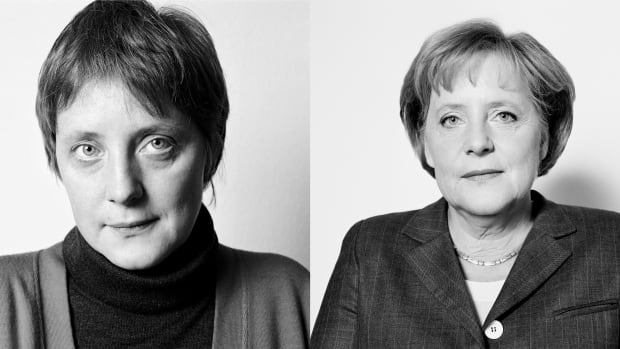 Angela Merkel and the art of being ordinary

â€œI was struck by her power even though she was an inexperienced woman at the time,â€ Koelbl said.

“She was a scientist, then turned to politics. But even so, she already had a strong individuality and also a strong will. She already knew what she wanted and what she didn’t want.”

Koelbl, now 80, was starting a project to document the impact of power on people over time. She would continue to photograph Merkel, who is stepping down as German Chancellor, intermittently over the next 30 years.

When they started, Merkel was 37 and had been a member of Germany’s first post-unification parliament for only a year, and recently appointed minister for women and youth in the cabinet of Helmut Kohl, the father of the German unification.

Other politicians on the project included Gerhard Schroeder, who was Chancellor from 1998 to 2005, and his Foreign Minister, Joschka Fischer, in the late 1990s.

Schroeder is pictured with her trademark cigar while Merkel said she did not know how to sit or where to place her arms, recalled Koelble, who did not give her subjects any instruction beyond a request to be “open”.

But it was Merkel who has stood the test of time, becoming one of the world’s best-known political figures, but also one of the most enigmatic.

That’s what makes Koelbl’s portrait series so interesting: Seeking the common thread connecting the clumsy MP in her 30s to Time Magazine’s Personality of the Year in 2015, with a cover headline that read: ” Chancellor of the Free World “.

By that time, Merkel had already been at the helm in Germany for a decade and Koelbl had started taking pictures of her more regularly, each year she was Chancellor.

â€œShe really learned to wear a mask in a way,â€ Koelbl said. “She talked about it in the interviews I did with her. That she had to learn it. And I think she learned it really well.”

Critics and advocates alike will say Merkel’s straight face and calm exterior in the face of more explosive personalities have served her well.

“If you want one ingredient in her success, it’s that she’s a very cautious person,” said Klaus Goetz, a specialist in European politics at the Ludwig Maximilian University in Munich.

“It’s very rare for something to slip out. And she’s not like Boris Johnson or some very impulsive kind of person. She’s very controlled. She’s in control and in control.”

“There is no secret”

“The only secret is that there is no secret,” said Ralph Bollmann, author of a recently published biography of Merkel titled The chancellor and her time.

“She’s the way she is. And I think only people who have a macho-style image in their minds, a traditional politician, wonder if there is something [else behind it]. ”

Bollmann’s theory is that Merkel learned to keep her own advice as a young girl, having grown up in former East Germany as the daughter of a Lutheran minister.

â€œAs a pastor’s daughter under a communist regime and then as a woman, and as an East German in [male-dominated] political, she always had a good sense of resistance, not to give in. ”

Merkel studied quantum chemistry at the University of Leipzig before moving to East Berlin to work. She was there when the Berlin Wall fell in 1989.

“In politics there are very often situations where there is only the alternative of going out or going up,” Bollman said. “She didn’t want to go out.”

Goetz has said Merkel holds up poorly when placed against executives like Kohl, calling her a manager and the latter a visionary.

“Under Helmut Kohl, we had the Maastricht Treaty with the introduction of the euro. We had openness to Central and Eastern Europe. We had German unification.”

Merkel’s defenders say it was her skill as a manager that defined her job as prime minister: an ability to seek compromises until the early hours of the morning and present a firm hand at the helm in times of crisis.

In 2015, when hundreds of thousands of refugees, mostly Syrians, arrived in Europe, Merkel was criticized for leaving the German border open. His response to worried Germans was ‘we can handle’.

The Syrians now settled in Germany call her the “mother of refugees”.

After 16 years as German Chancellor, Angela Merkel does not leave behind a legacy of change or innovation, but that of managing situations. 5:22

But the turmoil of their arrival also provoked anti-immigrant groups, and it was under their watch that a far-right party was elected to the German parliament for the first time since the end of World War II.

Bollmann believes his motivations were both personal and pragmatic.

â€œShe was a citizen of the former communist East Germany. She didn’t want to build new walls in Europe. And she wanted Germany to be an open society, a liberal society to preserve liberalism against populist uprisings. ”

Now that Merkel is leaving, the political autopsy of her tenure has begun, one of the criticisms being that she has failed to ‘perpetuate’ Germany or leave a vision of where the country should be. to manage.

â€œI think she’s been a stabilizing force there, but she certainly hasn’t been innovative at all,â€ said Travis Todd, a US-German dual citizen who runs a campus for start-ups in Berlin. .

COVID-19 has given Merkel another crisis to deal with and another boost in popularity. But he also exposed Germany’s outdated bureaucracy, which still relies on fax machines and regular mail.

â€œI mean, I think it was maybe last year or the year before we could finally book our public transport train tickets through an app, which was mind blowing,â€ Todd said.

But despite criticism, voters kept her in power for 16 years, choosing her even when the enormity of her footprint blurred the lines of the coalition governments she led.

“And she’s been accepted around the world as a woman leader, so I think we’ll keep her in mind. But it’s good to have a change now.”

Where did the spark go?

So what about this thread that connects young Merkel to the woman who steps down after 16 years in power?

â€œI could see she had a moral guideline,â€ Herlinde Koelbl said. “And I think she kept it for all these years.

“She kept herself as a human being and I think she’s a great politician and a great woman.”

One difference in today’s Merkel, Koelbl noted, is the loss of what she calls a sparkle in Merkel’s eyes.

â€œI think that’s the price to pay to be chancellor,â€ she said.

Koelbl had his last photography session with Merkel three weeks ago, still unseen.