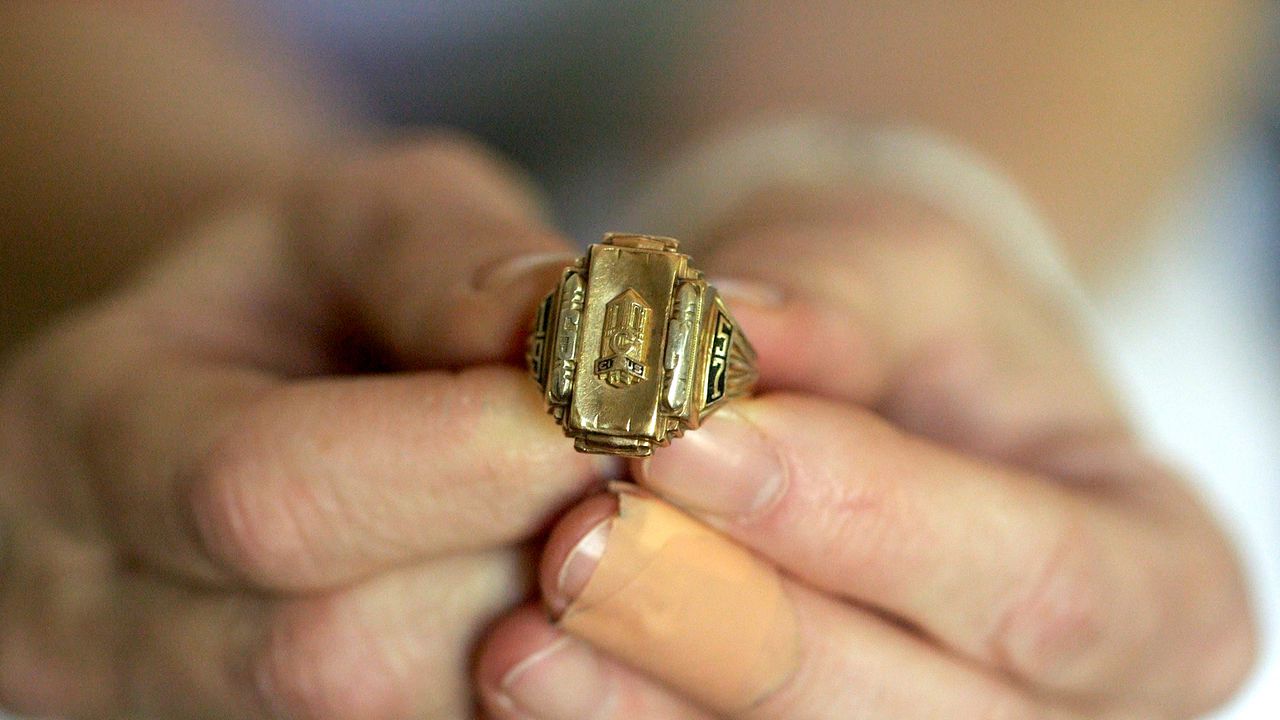 The ring among her late mother’s belongings did not belong to her family. We found its owner

In search of a hobby, some people take up gardening or knitting. Me? I try to return the lost rings to their owners.

Most of these rings have no value and sometimes the owner is no longer living. But following in the footsteps of these tiny objects often reveals unexpected connections between us. Here is just one of those stories.

After her mother died in 2011, Bronwen Edwards-Denney began cleaning her parents’ house.

In her mother’s wardrobe, she found a small box of jewelry, most of which she recognized as belonging to her grandmother. But there was also a high school class ring from 1957, with the initials “SM” which did not match any family member.

She wondered about it briefly, but had a monumental task ahead of her. So she put the ring back in the box, sealed it in a bigger box, and shipped it with a stack of things to her house to sort it out later.

Last year, when she read a story in The Oregonian about a lost class ring returned to its owner after four decades, she remembered her own ring mystery.

She dug up the ring and asked if I could find its owner.

From the design style, I knew the ring belonged to a boy, but I didn’t know which high school. The front of the ring had a large “C” and worn letters that appeared to read “CITRUS”. The logo on the ring – what looked like a triangle with several lines underneath – was a mystery. I thought it could be a jet or a stylized bird.

There are dozens of schools called “Citrus”, all, unsurprisingly, in Florida and California. I started with the list of schools in the California Department of Education directory. Many were easy to rule out as they didn’t exist in 1957, but none of the others seemed to match.

While searching in Florida, I found a promising Citrus High School founded in 1911 that had an aerospace program, which might explain the logo of an airplane or a jet. I called a school librarian, who pulled out a 1957 yearbook, but there were no graduates that year with the initials that matched.

The California Department of Education directory is an imperfect resource, so I started browsing other places to find schools that I may have missed. On classmates.com, I found a school I had never seen before: Citrus Union High School in Glendora, which closed in 1958. I emailed the alumni association from school, asking if the ring sounded familiar to me.

It’s certain. A 1958 graduate had the same style of ring. The group sent me a photo of the school’s mission-style steeple. It was the mystery logo on the front of the ring.

Glendora Public Library emailed me a photo from the 1957 Citrus Union Yearbook listing all “M” graduates. Three boys graduated that year with the initials SM

Stanley McCollough, deceased but having lived at one point in southern Oregon.

Steve Martinez, who is alive and has spent his entire life in Southern California.

And Stephen McLellan, who was also deceased and previously lived in Sandy, Oregon.

I called Martinez, who told me he had a class ringtone but had no idea what had happened to him. It was entirely possible, he said, that it was his ring, although he apparently never crossed paths with the Edwards family.

The ring was most likely picked up by Edwards-Denney’s mother or grandmother, both of whom had spent time in Southern California.

Edwards-Denney’s grandfather Lowell Edwards, along with Portland surgeon Albert Starr, developed the first successful artificial heart valve, which is still in use today. Lowell and his wife, Margaret Watt Edwards, founded Edwards Labs in Santa Ana, California in the 1950s to manufacture the valves, just 30 miles from Glendora.

It is possible that Margaret found the ring while they were in Southern California.

I brought my findings to Edwards-Denney. When I mentioned that Stephen McLellan had lived in Sandy, she and her husband were enlightened.

Edwards-Denney’s grandparents had long owned a summer home along the Sandy River. I reviewed my notes and the address I had for McLellan was next.

It was too much of a coincidence to ignore it. After several weeks of trying to reach one of his living parents, I spoke with Stephen’s son, Scott McLellan, who lives in Gresham.

Turns out the Edwards and McLellans were more than neighbors. There are two houses on the Edwards family property, and they occasionally rented the smaller A-frame cabin. In the late 1970s and early 1980s the McLellans lived there.

“He must have been in that A-frame,” McLellan said of his father’s ring. “It’s the only thing that makes sense.”

Scott McLellan said his father moved to Oregon shortly after high school, when he was 18 or 19, with his mother. The couple first settled in Bend and moved outside Sandy around 1977.

Steve McLellan ran the kitchen at the Cattle Company restaurant in Gresham. He died of a heart attack at 45, when Scott was 21.

“I learned bits and pieces about my father from various parents, but the man is a mystery,” McLellan said.

His father never spoke much about his childhood or his high school years.

“Whenever we asked my father something from his childhood, he would either get cranky, which was a clear indication to leave him alone, or he would start telling us a complex story,” he said, “ and usually the story ended with ‘fart’ or ‘poo’ and so we knew it was a joke.

“He just didn’t want to be asked a lot of questions for his own reasons,” McLellan said.

McLellan and Edwards-Denney spent an afternoon exchanging memories of the old spot on Marmot Road and summers along the Sandy River.

It is not known whether Edwards-Denney’s mother or grandmother found the ring or when it was found. Perhaps he was found in the house or on the property, many years after the McLellans left. Regardless of the woman who found her, she may not know or remember the name of the former tenant.

“All those who would know about it are sadly deceased,” McLellan said.

Scott McLellan is now almost 15 years older than his father when he died.

“But I still have the image of him as an old man in my head,” he said. “Having said that, I know there are a lot of things that have happened in my life that I am not particularly proud of, but as I get older I am not ashamed of that either. And the things my father might have told me if he had been through, might not have been that important.

He has very few items that belonged to his father, including his wedding ring and a favorite bolo tie.

The class ring will likely join them on a shelf at his house.

“My father had so little possessions, literally a handful of possessions,” he said. “We didn’t have a lot of money, so I wasn’t raised in an environment of possessions. What is most valuable to me is what I remember. “

They found an alliance on one of their first dates. Now married, they searched for the owner of the ring

After 46 years, couple in Oregon thought the alliance was lost forever, then fate stepped in

40 years ago, he found a wedding ring under the stairs. Now he has found his owner.

After more than 40 years, a ring found in a Portland high school locker is returned to its rightful owner

Have you found a ring that you would like to attempt to return to its owner? Email me at [email protected], or find me on Twitter: @editorswindler

Chief: No evidence that parade crash suspect knew anyone on the road – WSVN…