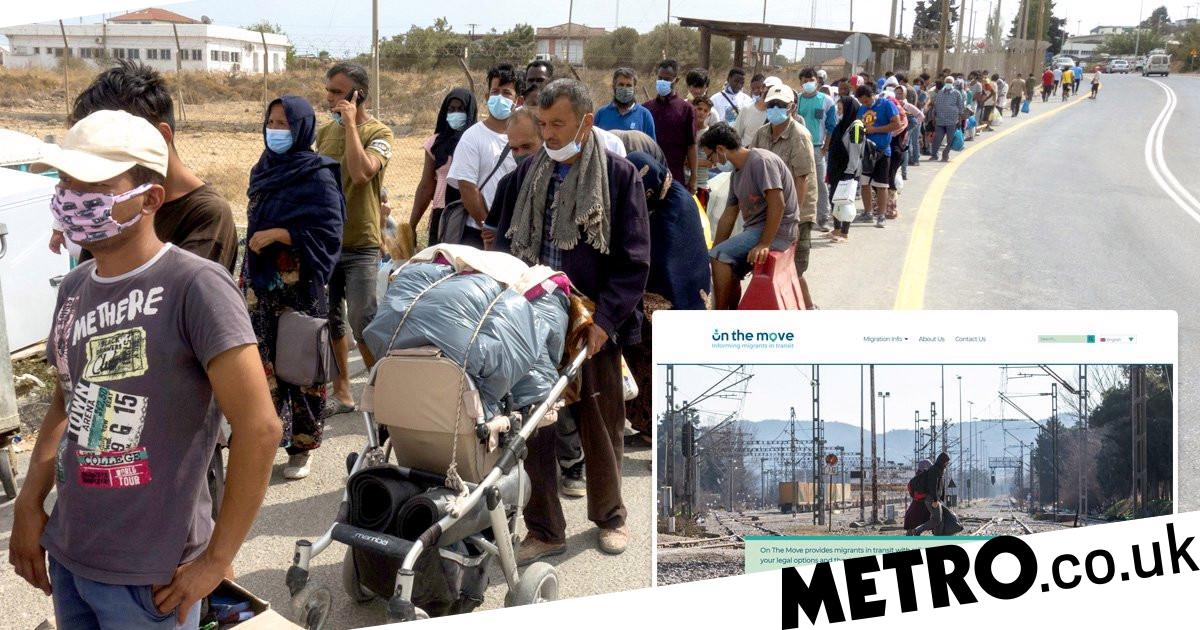 the The Home Office has spent thousands of taxpayer dollars to create a ‘deceptive’ website to deter asylum seekers from traveling to the UK, warning them ‘we will return you’.

On The Move has been exposed as a government-run ‘bogus organization’ with a logo and website with many pages on the ‘risks’ of going to Britain.

The links to the website were shared on social media as part of a Home Office campaign which cost £ 23,000 over a five-month period.

The Home Office said social media posts linking to the site were sent from its “clearly marked” Facebook and Instagram accounts. He said the campaign had been waged to deter migrants in France and Belgium from making “dangerous attempts” to enter the UK for which he “does not apologize”.

However, the website uses a .org domain – often associated with charities – and does not list that it is managed by the Home Office in its “about us” section.

Website visitors are encouraged to email On The Move with any questions they have – but are not told that they are in fact contacting the UK government.

In a section on safe and legal alternatives to migrating to the UK, the site gives details on how to apply for asylum in France and Belgium, but not in Britain.

A section dealing with the ‘realities’ of the asylum process, warns potential migrants that they will not be able to work in the UK immediately, apply for benefits or get free health care.

He says: “You will not be eligible for state welfare and in most cases asylum seekers receive a state allowance of just £ 5 a day for a living.”

The website says Britain ‘regularly returns people who enter via irregular routes’, but since January this year the UK has not been able to deport asylum seekers to the EU states due to Brexit.

Professor Tanja Bueltmann of the University of Strathclyde said the Home Office made a “clearly deliberate decision to hide who really is behind the site”.

She tweeted: “These actions obviously represent a complete dereliction of duty – and on many levels.

“To be very clear: for a government department to spread what effectively amounts to disinformation in order to maintain the hostile environment…. it is a truly despicable approach.

A Freedom of Information request from PA revealed the Home Office paid £ 23,000 to place targeted ads on Facebook and Instagram over a five-month period through April, sharing links to the On The Move website.

The messages were written in English, Kurdish, Arabic, Persian and Pashto and carried slogans such as “we will give you back”, “do not put your life or that of your child in danger” and “there is no hiding place. “.

Clare Moseley, founder of the charity Care4Calais, said The independent: “I am shocked that our government is determined to spend more time and money on deterring and misleading the vulnerable.

“Those who arrive on our shores are often traumatized, having taken life-threatening journeys to escape some of the world’s most dangerous countries.

“It is time for this government to show compassion and step up to help.”

The Home Office told The Independent that social media posts linking to the website were part of its “clearly marked” official Facebook and Instagram accounts as part of its campaign.

He said the publications on the pursuit to steer boats predated changes to the Crown Prosecution Service guidelines and maintained he could still deport asylum seekers.

The Underground Canals Threat Commander Dan O’Mahoney of the Home Office told Metro.co.uk: “We are seeing an unacceptable increase in dangerous and unnecessary small boat crossings.

“The communication campaign on migrants took place between December 2020 and April 2021 to deter migrants located in France and Belgium who intended to make dangerous attempts to enter the UK by small boat or hidden in trucks during the winter months.

“The campaign featured a series of important messages, highlighting the risk to life of making these deadly journeys and providing information on seeking asylum in the safe country in which they are found.

“We make no apologies to provide important and potentially vital information.”

Home Secretary Priti Patel is pushing for reforms to the British asylum system to give border forces the power to refuse migrant boats at sea.

Under the Nationality and Borders Bill, the UK would also be allowed to send asylum seekers to a “safe third country” or “designated places”.

The number of people who made the dangerous trip across the Channel in small boats in 2021 has already exceeded last year’s total.

MORE: Migrants who cross the Channel by boat to seek asylum “will no longer be prosecuted”

MORE: To say that Priti Patel “can’t be racist” because she’s a person of color is nonsense

Contact our press team by emailing us at [email protected]

For more stories like this, see our news page.

Get your latest news, wellness stories, insights and more